From the beginning of time leadership has been seen as the main skill to have in a successful organization. When these new development methodologies, the so called Agile methodologies, arise, there was no doubt in my mind that, again, leadership would take a central place on their affirmation. So what about Agile?

Before getting to the point, let me share, in a very simplified way, my view on how we can characterize management before Agile (will try not to write waterfall… ups) and after Agile methodologies.

So far, the traditional way to properly create and develop an IT company was to have a great business idea/product, wrapping it up around a vision, defining the mission that would guide us there, beautify it with some nice values, setup a strategy, and get a highly hierarchical structure that would execute all of that.

As we can see, because we have this superb work done by our visionaries, all employees were left to the job of doing it with the least cost possible in the fastest way possible, or in some extreme scenarios, in the time that someone else needs and way beyond their physical possibilities.

Getting, let’s say, 90% of the company into this mood, allowed political experts, assertive and sometimes aggressive, hard overworked people, idea stealers and creativity killers to be highly valued and able to quickly climb towards top management positions (hold on to this idea as we will be coming back to it later).

So summing up, in these companies, projects were managed in a clear top down attitude, where on top we have an exclusive, confined space of creativity and everything else was about executing it with an aggressive cost control paradigm.

On the other hand Agile, takes it to a completely different level.

Even though we can see the exact same basic concepts, some major twists happen on getting things done. So we need to have a great business idea/product, get an inspirational vision, define the correct mission, understand and identify the actual core values, setup a strategy, and get a great team. 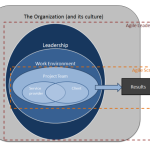 Agile management will push Vision, Mission and Values to the center of the management decisions, enabling teams to live and feel them as their own. As we can see on above picture, to accomplish that, leadership will accommodate teams and all collaborators in the best work environment possible to drive them into delivering results.

The final effect of it will be a natural commitment that will drive everyone to achieve this initial great idea/product, based on constant feedback from, both internal (employees) and external (costumers) sources. This delivering value driver will ultimately motivate everybody to the daily effort needed to accomplish it.

Summing up, these companies are able to constantly deliver value, in a global collaborative environment, making all evolved feel like a mini CEO, with an aggressive feature delivery paradigm.

The leadership differences between the two contexts

We can clearly identify differences when looking at the changes forced by Agile methodologies. Changing from a paradigm of cost control, scheduling management, pushing people to limit into one of adding value through people conducting their creativity, commitment and team work. All towards highly valued products that meet the current effective needs instead of the initial planned ones.

These differences are also reflected on the X and Y generations attitude towards both personal and professional lifestyle. The Inspirational video bellow, “We All Want to be Young” from Box1824, reveals just that, but every time that I watch it I can’t help but wonder if generational behavior forced professional conducts or the other way around… probably a subject for a future article in xekin.org.

What role will leadership take in Agile?

I see two different moments and timings where leadership in Agile will take different but central roles.

This profound change will put everybody under stress, derived from the fact of not knowing how to react to situations, if we are doing it right and eventually not seeing where all of this will take us.

These moments of great uncertainty require a huge amount of faith in Agile, and I believe that if insisting on doing it properly, at the end, everything will come together.

Here is where leadership is, by far, the most important ingredient and that if missed, the entire process will definitely be at stake if not doomed.

At this transition stage, leadership must be effective on showing the path, reaffirming at every moment the values of Agile, allowing a failure to evolution, attitude, nurturing the process, taking its costs, giving all conditions for the teams to progress.

After the transition battle has been won, we enter a stage where everybody is secure on the process, and we will try to start to make the most of it.

At this stage it is fundamental that the teams know exactly what is expected by the company, or in other words, everybody must be fully aware about its vision, mission, strategy, values and fully embrace them.

The Agile concept of empowering the team, giving them (Product Owners and Developers) more liberty to decide how to get there by self-organization, constant feedback analysis, reacting to changes in the process, changing deliveries away from the initial idea, but close to the identified needs. All this can have the undesired effect of having products disconnected with each other.

The above concepts (vision, values, etc.) should serve to guide the teams to make coherent decisions that will lead them into delivering the expected value to the final product. Leadership, and ultimately leaders, must call on them this communication process, nurturing the message, praising and rewarding success, identifying possible disruptive situations and promote clear solutions.

This extremely important work should be done at all levels of the implemented hierarchy, driving the company to a healthy feeling of ownership and a natural commitment of everyone at all time.

At what extent, leadership will impact success on Agile?

Strong leadership, or the lack of it, will ultimately be the stepping stone for Agile development, either to success or to failure. If you think about it, it makes a lot of sense. The reason is clear, and sits beneath the core changes that Agile forces.

When we change into a paradigm that empowers teams and ultimately people, we have to lead them into the right state of mind, so they can work energetically towards creative, value driven solutions. It is my deepest conviction that we can only achieve this by good leadership. Leadership is all about people.

Leadership is all about bringing out the best of people and not the most.

Creativity is the skill that only human beings have above all other animals on earth.

So it is fair to say that when leadership brings the best in a person, the chances that it will be something creative and innovative are high. When all of this process is somehow translated into a methodology we have Agile.

In the Agile Manifesto at its History page we can read this enlightening statement from Robert C. Martin, president and founder of Object Mentor Inc.:

At the core, I believe Agile Methodologists are really about “mushy” stuff, about delivering good products to customers by operating in an environment that does more than talk about “people as our most important asset” but actually “acts” as if people were the most important, and lose the word “asset”.So in the final analysis, the meteoric rise of interest in (and sometimes tremendous criticism of) Agile Methodologies is about the mushy stuff of values and culture.

In conclusion and answering to the question, I believe that leadership will have a tremendous effect on the success of Agile development. In fact, I dare to say that in light of that described above, leadership is the centerpiece of the Agile methodology.

Is Agile, in fact a weak leadership killer?

If at this point the answer to this is not clear, let me put it in a more practical way. Please go back to the above thought, where before Agile methodologies, creativity killers are highly valued and quickly climb to top management positions.

Taking that as true we have at this exact time, the management positions taken by people that naturally, completely trust and fully relies on cost-control tools, in order to fully master the costs and the process of delivering the planned (not changeable) features.

These managers were not evaluated by their leadership skills, rather they were evaluated by how far they can push people to their limits without breaking them, and in consequence how much costs were pushed down.

Everything that these managers (who are still at charge) needed were great Excel skills (or any other tool for that matter) to properly control how everything was going. When these central and fundamental skills are taken away from the process by Agile development, all of them are completely voided on the skills that got them into management positions. The reaction is a natural fight to this paradigm change, maximized by this feeling of void and lost of control.

Bruna Martinuzzi explains this behavior as being the consequence of mental scripts. In “The Agile Leader: Adaptability”, she states and quotes:

Mental scripts may also result in stubbornly clinging to the notion that “this is how we have always done it”, refusing to understand and accept the realities of a new situation.

Failing to understand and adapt to this new paradigm leads companies to well-known effects like the so called “Scrum but” or even worst the “Water Scrum Falls” effects:

These are small examples of actual managers trying to change into Agile however failing to understand its core concepts, and therefore pushing the wrong tools into place. Some will succeed on getting this done and some others will totally fail, it will depend ultimately on the company’s understanding of Agile.

The real change is clear: they should stop to rely on Excel skills and start relying on Leadership skills.

So with a high degree of certainty I turn the question into a statement:

Agile is the weak leadership killer.